Urban mobility has emerged as one of the key challenges in the development of Indonesian cities. The exponential growth of motorization has increased the frequency and duration of traffic congestion across metropolitan and major cities in Indonesia. Mitigating this unsustainable trend, Urban Mass Public Transport Systems must become the backbone of urban transport and a pillar for the long-term solution of metropolitan and major cities in Indonesia. With that, the Government of Indonesia (GoI) has committed to developing urban mass transit system in 6 metropolitan areas and other urban areas.

In supporting the GoI, the Indonesian Bus Rapid Transit Corridor Development Project (INDOBUS) was formed to provide technical assistance related to the development and implementation of the Bus Rapid Transit (BRT) system that adheres to international standards. INDOBUS is a technical assistance component under the SUTRI NAMA programme funded by the Government of Switzerland, via SECO (Swiss State Secretariat for Economic Affairs).

INDOBUS supports the development of BRT corridors with dedicated lane in five pilot cities in Indonesia, namely Pekanbaru, Batam, Bandung, Semarang, and Makassar. On 8th October 2019 the Ministry of Transportation (MoT), the provincial governments, and the city governments of the five pilot cities held a signing ceremony to close a Memorandum of Understanding (MoU) on the implementation of SUTRI NAMA and INDOBUS project activities in the pilot cities. With the MoU, the cooperation on the preparation and implementation of Bus Rapid Transit (BRT) with segregated lanes in the five pilot cities has been formalized alongside other transformative steps towards a more environmental and socially sustainable urban transport sector.

After the signing of the MoU, INDOBUS concluded a Pre-Feasibility Study (PFS) in 2019 which resulted findings on the road conditions, station location, visualization of the BRT corridor, social and economic benefit, and proposed system of the city. The project has since been welcomed and supported well by the provincial and city government of each of the pilot cities. During a meeting with the project team on 19th November 2019, the Mayor of Bandung affirmed his support and commitment for the implementation of the INDOBUS project and declared his intention to form a transport task-force team to facilitate further work of the project team. Such affirmation has also been stated by the Mayor of Pekanbaru on 30th January 2020, in a progress meeting regarding Pekanbaru’s BRT corridor design discussing aspects of the PFS. 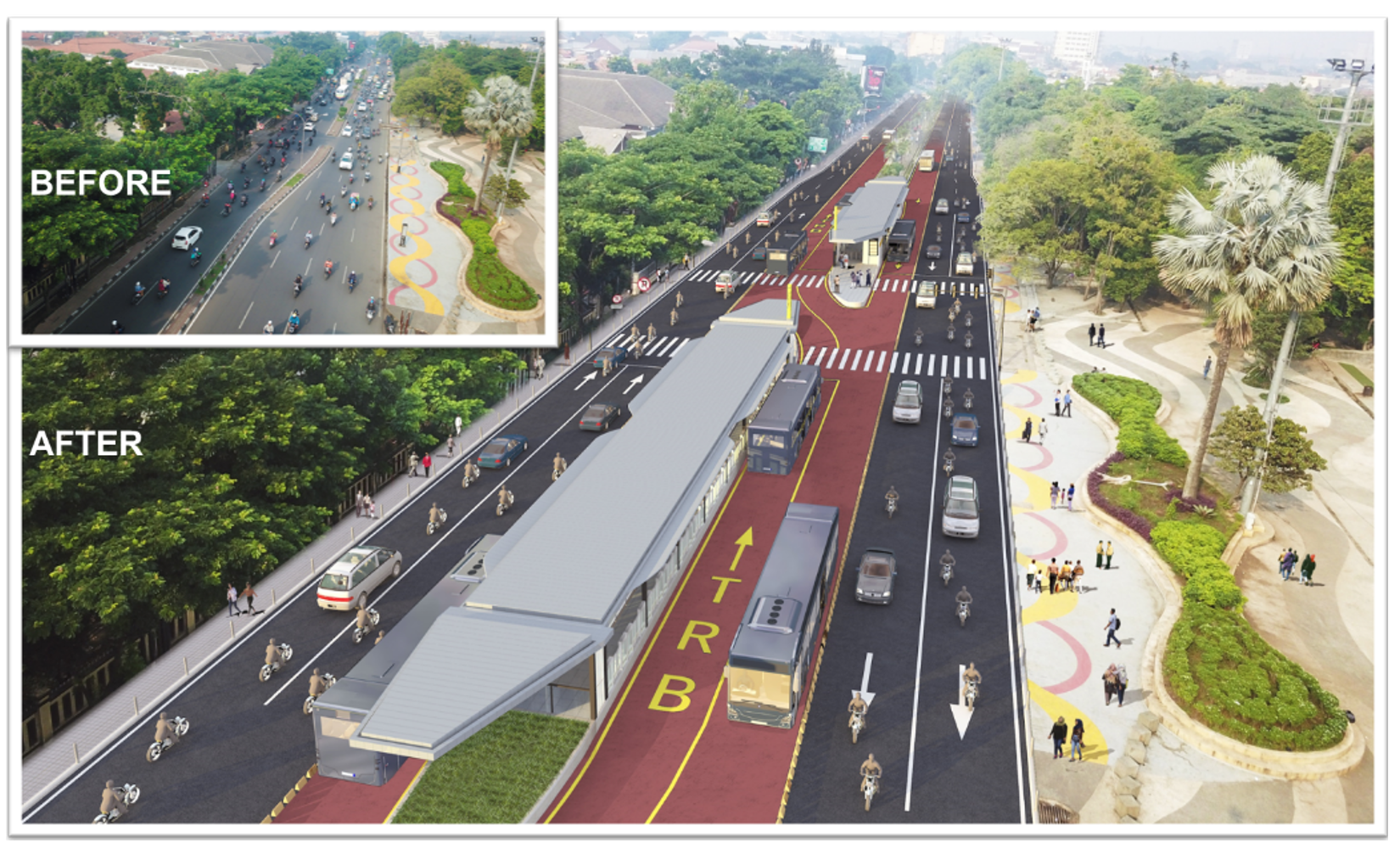 As a continuation of the PFS, a Feasibility Study (FS) commenced in early 2020 for the development of BRT corridors with dedicated lanes in each of the five pilot cities. In Semarang, INDOBUS collaborated with PT SMI, who has pledged through an MoU to co-finance the development of the FS and funding structure for the project, with the anticipated remaining sum to be funded by the Green Climate Fund’s (GCF) through its Project Preparation Facility scheme.

In the face of the many challenges and adjustments made by the GoI due to the COVID 19 pandemic, INDOBUS and the MoT continue the activities of the development and implementation of the BRT in the pilot cities. To further solidify the strategy and overcome travel restriction, virtual meetings were held with respective provincial and city governments in September 2020. Amongst the outcome of the meeting are finalization of BRT routes as part of the overall service plan in Bandung and Pekanbaru, preparation of Project Implementation Unit (PIU) at the sub-national level, and collaboration with the Financing Energy for Low-carbon Investment – Cities Advisory Facility (FELICITY) project of GIZ for the study in Batam and Makassar which will all be implemented during the next stage of the BRT development.